Chat with us, powered by LiveChat What is Alcoholism? | Step 1 Recovery Centre 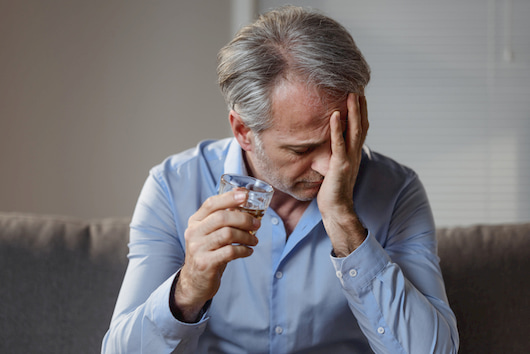 Alcoholism is a condition that can have a terrible effect on your mental and physical health and it’s no surprise that it’s categorised as a disease. While you may be well aware of the dangers of alcohol, and even have a health problem caused by your drinking, you may well find it difficult to stop. However, when you look for information such as ‘what is alcoholism?’, you may find there are many different definitions of the condition, so it can be difficult to self-diagnose. That’s why you may benefit from help with your drinking from Step 1 Recovery, and if we think treatment is necessary, we have residential rehab centres in Spain and the UK where you can detox and begin the recovery journey.

Problem drinking can take many forms. Many people think that alcoholics drink alcohol all day every day, but there are many drinking patterns that can be considered problematic. The government suggests that people drink no more than 14 units a week, and a unit can be a small beer, wine or shot of spirit, and that the units are spread over several days if possible. If you regularly exceed this number, or you use all your units in one or two days a week, then this kind of binge drinking is a form of alcoholism.

While some alcoholics take part in heavy drinking that stops them being able to take place in everyday life, others are functional alcoholics which mean they still work, raise families and have a social life, but are hiding certain patterns of behaviour. Because this behaviour can go on for years without being noticed, they may start to need to consume more alcohol to feel its affects, building up a tolerance.

Alcoholism is considered to be a spectrum disorder, so you can be a mild, moderate or severe alcoholic. Some people with milder forms of alcoholism might not even drink every day, but they may have strong cravings whenever they aren’t drinking and experience negative emotions. At the more severe end of the disorder, we see people who are physically dependent on alcohol for whom stopping drinking suddenly could lead to horrible withdrawal symptoms and even be fatal. In these cases, medical supervision is highly recommended when detoxing.

The consequences of alcoholism

Around 7.5 million people in the UK show signs of alcoholism, and because the NHS is so stretched, it can be difficult for those who need it to seek treatment. In milder cases, cutting down on drinking and attending Alcoholics Anonymous might get you back on track, but for many people, professional help such as rehab is the best option.

There are many negative effects of alcohol on your physical health, and the longer you drink, they worse they can become. Those with alcoholism often suffer from anxiety, depression and other mental health problems, and may drink more to self-medicate, leading to a negative cycle of behaviour.

People who drink to excess will often stop eating properly, but the increased drinking means they can gain weight and look bloated. This can increase the risk of diabetes and other illnesses associated with being overweight. Because they aren’t eating, they aren’t gaining vital nutrients, so can become malnourished and sick. There are other specific risks such as liver disease for which alcoholism is one of the biggest risk factors.

Alcoholism can affect your life negatively in many ways, from causing relationship breakdowns to problems at work and even legal troubles, so if you’re concerned about your drinking it’s never too early to seek help.

The signs of alcoholism

If you’re looking for information such as ‘what is alcoholism?’ then you are most likely concerned about your own drinking or that of a loved one. There are a number of signs that someone is at risk of developing an addiction to alcohol:

There are also a number of risk factors that make you more likely to develop an alcohol use disorder. Genetics play a big part, those who have parents who were alcoholics are four times more likely to battle alcoholism themselves, and if you add in environmental factors such as peer pressure to drink from friends or colleagues, then the risk is even higher. Those who’ve suffered trauma are at risk of developing an alcohol addiction, as well as those who lead a lifestyle that’s stressful, such as those with high-flying careers. There’s also a link between some mental health issues and alcohol, and those who abuse alcohol may be suffering from PTSD, anxiety, depression or psychosis.

People don’t develop an addiction overnight, there are many stages that take someone from an occasional drinker to an alcoholic. Moderate drinking can often become binge drinking after a traumatic event or difficult period in someone’s life, and if the issue is identified early on then simply attending support groups may be enough to turn things around.

Those who develop alcoholism will often binge drink for social reasons, but as time goes on, they may find themselves drinking regularly to improve their mood, or because they want to mask the withdrawal symptoms. Without finding the right treatment options such as rehab, you may find that it’s physically unpleasant not to drink, and if you stop, then you end up with intense cravings and the shakes.

With help from Step 1 Recovery, you can detox from alcohol and learn how to stay away from it for life. While some people with alcoholism want to be able to drink socially, we often recommend complete abstinence once you’ve gone through treatment, as there’s always the risk of getting back on the slippery slope of alcoholism.